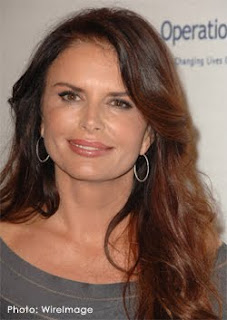 This post may seem completely out of the blue for loyal PTR readers given I've been (and remain) on hiatus from this corner of the television blogosphere. As life continues to take some interesting turns for me of late, there seem to be only a handful of reasons that bring me back to the world of television given I just don't have much time to watch it anymore.

But when one of those reasons is seeing an angel turn 50, I need to take time out and wish her well.

I owe Roma Downey at least that much (actually, way more ... but that's another story for another day).

Having had the great pleasure (er, let's call it honor) of interviewing Roma last year for PTR, it confirmed for me what we here already know: there are certain actors who are timeless, and there are certain shows that are timeless. We owe them as much reverence in hindsight as we did during their prime.

Not surprisingly, Roma remains at the top of that list for us, as does her legendary portrayal of Monica the Angel on the phenomenon that was (and still is) Touched By An Angel.

As she celebrates a milestone birthday today, I break from hiatus to send her our best wishes for continued health and happiness in the coming year. 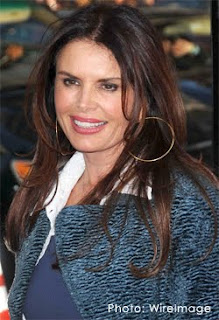 Your Friends at PTR

And if you're missing Roma these days, tune into Hallmark Channel to catch re-runs of Touched By An Angel (though be prepared for sudden channel lineup changes that seem to put TBAA on a "break"); or, your can visit her official Web site and join her official Facebook page (both run by the lovely Ms. Anna K, long time Webmaster of Roma's official site and friend here to PTR).
Posted by LillyKat at 12:00 AM

I hope life treats you well.

Good to see a post by you again LillyKat.

i`m one of your most lovely and very most loving fan of yours of all time, how is the weather doing these days so far. i was just just wondering if i could give you a big huge #KISSES# and also a most biggest huge #HUG# and also a most bigg huge #SMOOOOOOOOOOOOOOOOOOOOOOOCHES# all at the sametime. i have a big huge #CRUSH# on you lately and also i truly do love you a lot and do you love me too? i think about you lately too. you are the most lovable, beautiful and you are my most BEST AND GREATEST FAVROITE AND BEST ACTRESS AND VERY MOST ATTRACTIVE PERSON that you really are at all time, electrifying, cuteness, gorgeous, precious, adorable, loving, fantastic, prettiest, wonderful, sweetiest, impressive, terrific and very very most attractive, incredible actress person that you really are. and you are my most gorgeous person that you really are too. and you are the most ATTRACTIVE PERSON ever. and this one is for you too my sweet loving dear #SMOOOOOOOOOOOOOOOOOOOOOOOOOCHES# there you go. ps. please write soon. well take care and god bless and one more thing I LOVE YOU HONEY. i honestly truly do love you a lot too.

Bones is Back on Fox

Fan Sites/Message Boards of our Faves

Get the PTR Widget